I am an open book gal. I have practiced running a business in as transparent way as I could and I saw the magic with my own eyes. By that I mean that workers know and understand the vision, the mission and the numbers – all the numbers of the business. I also think that  I understand what makes people feel valued. People want to feel a part of the bigger picture. They want to be listened to. When we are working,  we want others to appreciate us for what we do and what we know.  It doesn’t matter what work you do. It can be highly trained professional work. It can be making pizza. It doesn’t matter. Because in the end our job satisfaction is about the team, not about the money.

But when I am teaching this. Often, business owners don’t believe me. They still want to command and control. They want an army of clones to deal with their business the way they do. So I am so happy to send you to this lengthy article published in this month’s 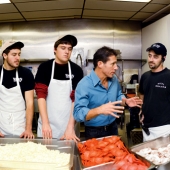 Inc. Magazine. . Kudos to Sarillo for doing it right. And kudos to Inc. for telling the story.

Lessons From a Blue-Collar Millionaire

When Nick Sarillo launched his pizza business, he had one goal in mind: to create a corporate culture unlike any he had seen.

It’s Takeout Tuesday at Nick’s Pizza & Pub, and the air is thick with the smells of hot pizza crust, peppers, onions, and cheese. Eighteen young men and women — most of them high school age — form an assembly line between a row of worktables and a long bank of pizza ovens. The kids laugh and shout, even as they focus intently on their tasks.

« Previous Post CNNMoney.com writes about TAB- Why not expand your business while you are slow? Next Post » The Other Ruth Schwartz

A marketing plan is like a fine toothed comb…

A marketing plan is like a fine toothed comb…

“I Need a Marketing Plan!” Workshop

“I Need a Marketing Plan!” Workshop

1 Response to "How You Can Make Your Team Magic"